Perfectionism asks of you. You give.

Perfectionism asks for more. You give, looking forward to payday.

Perfectionism asks for more, even though payday has come and gone, and promises to repay you. You give a little extra to show you’re worth it.

Perfectionism asks for more and promises to repay you for all your time, but it wants just a little more, to prove you’re serious about your job. You give more, because it’s going to be one huge paycheck.

Perfectionism pulls you into the office and starts to make you feel bad for not doing extra last time. It gives you an example of how you could’ve accomplished more, but didn’t seize the opportunity.

It recites the company’s core values. It tells you excellence and perfection is better than small rewards for your time. You think maybe, if you can give the most out of all the employees, it’ll pay off big time.

Perfectionism finds you outside your car in the company lot after an especially long day and asks where you’re going. It sternly reprimands you for not thinking about working through the night. It demands more, and criticizes you for not finding ways to give more overtime.

It asks if you’re serious about your job. It asks if you realize the excellence and perfection of the project you’re working on, and belittles you for asking about your paycheck last week.

It installs a tracking device to monitor what you give. You feel ignorant for not knowing the greatness and perfection of the project. You realize you could’ve given more. You don’t want this privilege to pass you by.

You give three days in a row.

You’re paranoid cause’ you have to use the bathroom…

You hear water. You open your eyes. Only one does. You see bathroom tile and blood. The sink is running.

Perfectionism rests a boot on your face. It pushes down slowly and talks. How dare you it says. Not even willing to undergo a little humiliation for christ-sake. Was pissing yourself not an option?

It asks what you’re willing to sacrifice. Everyone can give up sleep. It begins reciting the company values. It adjusts its boot and tells you to say it too.

It says how stupid your ideas are. It asks if you want the janitor job that just opened up. It says it’s going to need more from you…

This short story first appeared on Medium and was written by Adam Muller. It is reposted here with his permission.

Wednesday, August 12th
11:00am - 1:00pm PST
WHO SHOULD ATTEND:​
If you have ADHD and need to get stuff done, but find yourself overwhelmed and/or stuck in these COVID-19 times, this session is for you.
Powered by Convert Plus™ 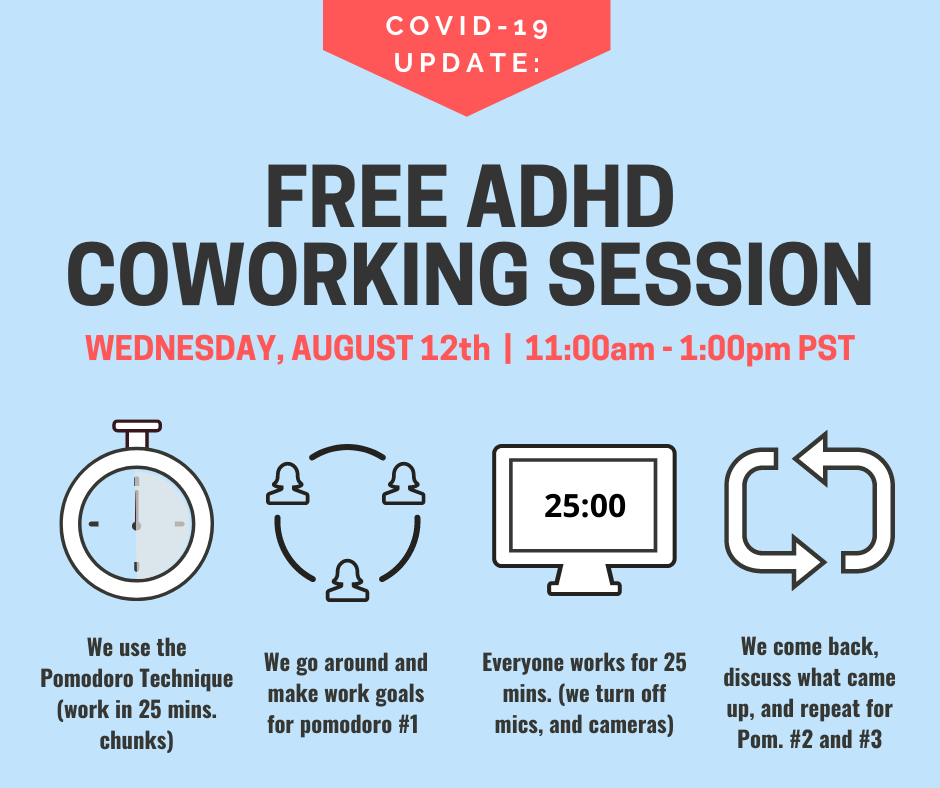 If you have ADHD and you've got work you're procrastinating on,
this session is for you.

Powered by Convert Plus